PHOENIX – When Brett Fischer and John Wells crossed paths at last year’s NFL Scouting Combine in Indianapolis, they had no idea what their relationship would entail less than 12 months later.

But they clicked instantly, thanks to similar business interests and a deep-rooted connection to metro Phoenix. It was a perfect match.

Now, the pair is altering the landscape of sports performance and technology with a new way to more accurately clock 40-yard-dash times and measure biometrics in other sports drills, where fractions of a second can make all the difference for an athlete.

According to NFL.com, the players who recorded the seven fastest 40s at the combine all were selected in the first four rounds of their respective NFL drafts.

“Millions of dollars are resting upon the 40-yard dash, and to have something you know you can rely upon and be accurate and easy to use is incredible,” said Fischer, the founder and owner of the Fischer Institute of Physical Therapy and Performance in Phoenix.

Wells, who played football at Brophy College Prep, is the creator of the JAWKU Speed, a sports training wristband that pairs with a cellular device to provide a more precise timing system for athletes. 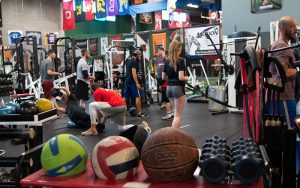 Professional athletes from across the country come to the Fischer Institute in Phoenix for physical therapy and performance training. (Photo by Thalia M. España/Cronkite News)

The idea originated in 2012 when Wells was a junior at Cornell University, and his vision since then has been developing wearable technology that provides a more efficient and accurate method to time athletes than traditional devices such as a stopwatch.

The product consists of the wristband and a small sensor that works independently but hand-in-hand with an iPhone or iPad through the JAWKU Speed application. An app for Android devices was just added.

The sensor captures the start data and the phone, which is set up at the end of the drill, serves as the “laser gate or live photo finish.” When the runner crosses the finish line, the phone app snaps a photo, analyzes the torso and logs the time splits.

In an effort to reach the highest level of accuracy, Wells said he spent five years on research and development and conducted thousands of tests to dial in the algorithms used in programming JAWKU Speed.

He envisioned a product for athletes that was affordable, easy to use and efficient.

“The whole goal is, we want to help athletes,” Wells said. “We’ve developed this technology, and everything we do is to make the athlete better.”

While introducing the technology at the combine last spring, Wells quickly caught the attention of Fischer, who attracts players from across the country to his facility train during their offseason.

One of those athletes is former Duke linebacker Joe Giles-Harris, who hopes to compete in the upcoming NFL Scouting Combine. The JAWKU Speed has become an important and, he said, convenient piece of his training regimen.

“Whenever you’re done running your (repetition) or doing whatever you’ve just done, it gives you a positive number,” he said. “You can learn to look at and then get better, or see what you’ve got to improve on.

“We’ve used it for the cone drills, the 40, shuttle, 5-10-5 (pro agility drill). … I think the best part about it is how fast you get your number back, and how convenient it is to just slip something on your wrist.” The JAWKU wristband is designed to be an athlete’s personal stopwatch. Paired with a smartphone app, the technology assists an athlete in measuring speed, agility and reaction time to help them improve their performance. (Photo by Thalia M. España/Cronkite News)

In November, the Fischer Institute announced its partnership with JAWKU via Instagram, making JAWKU the official timing system of the facility. Fischer described JAWKU as a “cutting-edge company” and praised Wells for his creative and innovative ideas.

“We have this symbiotic relationship that’s very good for both of us,” Wells said. “Honestly, when I started the company, this is what you really dream of. You get these amazing sports performance centers that are using your device like Fischer Institute. They vetted the technology. They see the accuracy. They see how it’s helping them.”

Wells said that other launches are in the works. The JAWKU Speed’s ability to measure other data will be available soon. Improved features allow athletes to measure other biometrics, such as an athlete’s vertical jump, velocity, acceleration and calorie burn. It can be paired with a heart-rate monitor to provide cardio assessment.

Aside from sports performance, Wells and Fischer are collaborating in hopes of making additional technological breakthroughs in physical therapy and performance.

“For physical therapy, it’s really important because we can put a watch on a patient and test one leg versus the other leg and get information on our phone within seconds,” Fischer said. “(We can) get power numbers and be able to access differences.”

Meanwhile, Fischer and Wells are preparing to return to the NFL Draft Combine, where a year after their meeting, they will see athletes such as Giles-Harris already benefiting from their work.