Running an important part of Brett Hundley’s life on, off the Cards’ field PHOENIX – Brett Hundley loves to run. Not just when he steps under center on an NFL field, or when he made Pac-12 defenses look silly at UCLA. He has had a deep passion for it most of his life, from running through his local neighborhoods to racing across the world in the offseason.

“When he was a very young kid, him and his dad would wake up at four or five in the morning and run almost every day together,” said Shaun Aguano, Hundley’s high school football coach at Chandler who now coaches running backs at Arizona State.

Maybe that explains why he’s always been so lethal on the ground and why the Arizona Cardinals wanted him to return. After backing up rookie Kyler Murray last year, the second-string quarterback recently signed a one-year contract extension to remain with his hometown team.

Hundley appeared in three games last year, including when he replaced the injured Murray against the Seahawks and helped the Cardinals grab a 27-13 win. The sixth-year quarterback has developed a strong relationship with Murray and will continue to let it grow in year two.

“It’s just natural,” Hundley said of their chemistry. “You don’t go in as the older guy trying to be big and bad. I think it’s just a natural progression of him figuring me out and me figuring him out, and the relationship built that way. Kyler’s an awesome guy, he’s done some great things and I can’t wait to see what he does year two.”

Should he be asked to fill in for Murray again this year, however, he is expected to be prepared and ready, just as he was on that December day in Seattle. With the threat of COVID-19 dominating talk in the offseason, staying ready has presented itself as much more of a challenge to players across the league, forcing many to alter their routines. 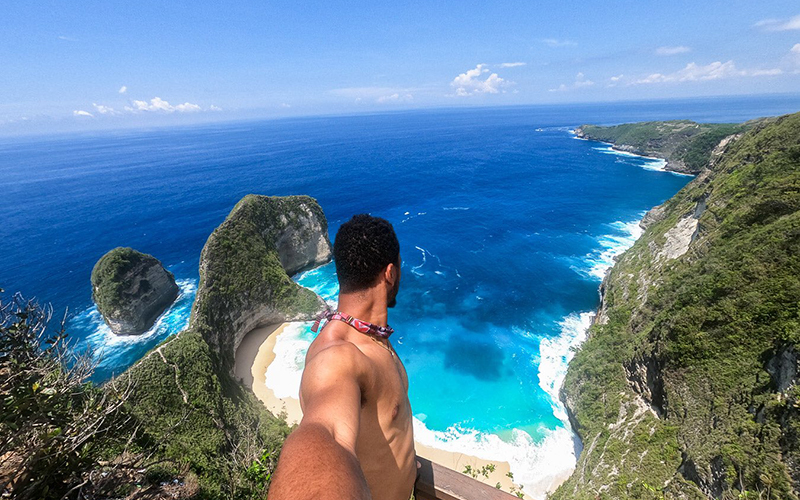 Hundley was nearly quarantined overseas due to the coronavirus. His spots included Nusa Penida, an island southeast of Indonesia’s island Bali. (Photo courtesy of Brett Hundley)

Hundley found a way to intertwine being productive and enjoying his offseason, and it came through traveling. He spent about two months seeing the world, including going to New Zealand and Bali. He was supposed to continue his voyage to South Korea and Spain, but his time was cut short due to the coronavirus.

Traveling often makes it tough to fulfill a workout routine every day and stay in shape, especially as a pro athlete. Hundley, however, made it a point of emphasis.

“In the offseason, my number one thing is hot yoga, and there’s yoga places everywhere you go,” Hundley said. “Growing up, the only thing I ever did was push-ups, sit-ups and running and that’s what I’m sort of known to do.”

The running part, especially. The Arizona native found a perfect solution to sightsee, utilize his travel time and stay in shape, all for the price of one.

“I always try to do a run every place I’m at, and I’ve got some cool footage doing it. I try to run for at least two to three miles,” Hundley said. “I’ve had kids running with me, running in the coolest places, so it’s a pretty nice cut-up of stuff, and it’s been a good way to see places as well.”

Hundley was always running. Growing up as a kid, he ran a few miles down Chandler Boulevard during the week before class.

“Brett is a very mature kid, even back when he was in high school. He had his goals set,” Aguano said. “I know part of it was spending time with his dad in the morning and running.”

At UCLA, Hundley rushed for 30 touchdowns and a little under 2,000 yards in three seasons and is still a productive dual-threat backup NFL quarterback. 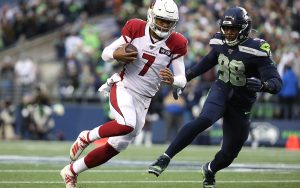 More often than not, backups possess a similar playstyle to their starters, with the Cardinals being no exception. Hundley rushed for 35 yards on six attempts in the win over Seattle last year, picking up right where Murray left off. But when not playing, he has much to offer Murray through his development.

“He brings that stability of intellect,” Aguano said. “I think it brings another coaching aspect from a peer relationship.”

Hundley has made multiple stops in his career. He wheeled through Los Angeles in college, followed by professional stops in Green Bay and Seattle. Off the field, he ran through the continents of Asia and Australia. But now, for the second straight year, he’s positioned back home, right where he feels he belongs.

“It really means a lot to me,” Hundley said on playing at home. “Especially going into year two now here. It was a blessing to be able to come back and play.”

Close
Running an important part of Brett Hundley’s life on, off the Cards’ field