TEMPE, Ariz. – When “pride” is mentioned in a sporting context, it often refers to support for a team.

Yet Phoenix Rising FC will be thinking about that word in a different context in June, which is Pride Month, with fans and players raising money for LGBTQ charities.

A campaign by the team’s two fan groups has led to more than $350 pledged for every Rising goal in June with the proceeds going to local charity Trans Queer Pueblo.

“It’s something we started last year, and we knew that we wanted to keep going with it and do it again this year,” said Alicia Cárdenas of Los Bandidos. “We decided to work with TQP this year because they were really responsive with us and they were really excited. We’d seen some of their own events that they had been putting on, and we just really liked what they were putting out there and things that they were doing for the community.”

Trans Queer Pueblo’s work focuses on assisting and empowering migrants of color in the LGBTQ community with meetings and events across the state.

While Rising’s Zac Lubin has backed the supporters’ campaign, two of his teammates are showing their support through the national Playing for Pride initiative.

Playing for Pride was first set up in 2017 by North Carolina FC player Austin da Luz, in response to his home state passing legislation commonly known as the Bathroom Bill.

“It was anti-LGBTQ legislation that really put North Carolina in a negative light,” da Luz said. “Being from here and taking a lot of pride in calling this my home, I just wanted to do something tangible to push back against that perception.”

Now in its third year, Playing for Pride has “snowballed.” More than 100 players are participating from all levels of the U.S. soccer pyramid with appearances, goals scored and clean sheets all resulting in donations. Among those involved are Rising’s Carl Woszczynski and Jon Bakero. 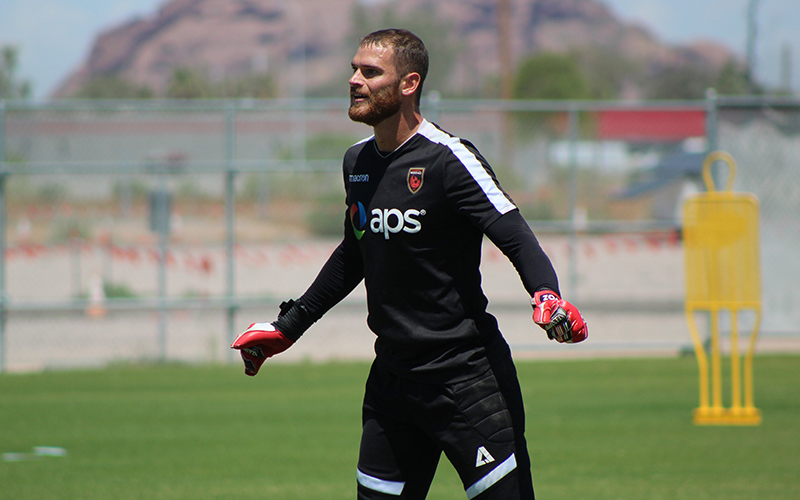 Although many factors played into Woszczynski’s decision to participate, he cites his brother-in-law as one of the most powerful.

“He came out maybe seven or eight years ago, as I started dating my current wife,” Woszczynski said. “Just seeing what he had to go through, how much happier he was once he came out and was open about his sexual orientation was a big eye-opener for me.”

The players’ initiative is raising money for Athlete Ally, a nonprofit dedicated to creating educational materials for teams and colleges and furthering LGBTQ inclusion in sports. Woszczynski and da Luz said barriers to participation in athletics still exist, so it’s a timely goal.

“I don’t think there’s a ton of conscious animosity, but people do on occasion use homophobic language without realizing the impact that it can have,” da Luz said. “So just teaching people what the impact of their words can be and teaching them to be more empathetic is a big thing.

“An offhand comment to one person can be really devastating to somebody else, so just getting people to realize that is a big step.”

The players’ work has only brought them closer to their fanbase.

“Any time the players want to take a moment away from their practice and say, ‘Hey, this is something that I believe in, this is something I care about,’ it means a lot,” Cárdenas said. “When they’re able to show these are the causes and things on their minds, it really endears us to them.”

Rising has five games in June, meaning there is no shortage of opportunities for fundraising.

“We’re just trying to help our community, to allow them to continue to raise up others who are in need of support,” Cárdenas said, “and we’re doing it in a really fun way.”

After all, during Pride Month or at any other time of the year, “what’s better than scoring goals?”