TEMPE, Ariz. – Sometimes, the right coach can make all the difference in a player’s career.

Take Ja’Tavia Tapley, a graduate transfer and the Arizona State women’s basketball team’s breakout performer this season. Tapley played three years at USC, and Sun Devils coach Charli Turner Thorne is her third college head coach in four years. Tapley has reached another level in Tempe, however, and she cites one simple reason.

“Coach (Turner Thorne) told me that she trusts me and I’ve never heard that from one of my head coaches,” the forward said earlier this season. “It made me feel good and makes me play as hard as I can for her and my teammates.”

Part of that trust means running plays through Tapley and giving her more opportunities to score. Last year, she shot the ball 10 times in a game twice. This year, she’s done that 12 times already. Once she partnered with Turner Thorne in Tempe, Tapley quickly became an offensive catalyst for ASU and leads the team with an average of 12 points per game.

Tapley runs an effective high-low post game with forward Jayde Van Hyfte, she can knock down mid-range jumpers and her quick feet and strong momentum lead her to the basket.

However, last season she hovered around the perimeter a lot while center Kayla Overbeck controlled the paint for the Trojans. Tapley shot 8 for 33 from three-point range last season. She has only taken five three-point shots this season because she has been more effective down low or in the high post. 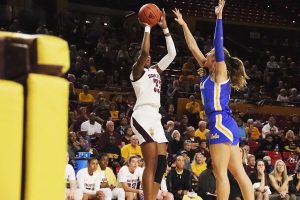 Tapley said she knows she needs to improve her rebounding and believes with her strength and size she coud excel in that area. (Photo by Alex Weiner/Cronkite News)

In her first year as a Sun Devil, she has already blown past her single-season USC career-high in points with 251 through 21 games. Her previous best was 179 points in 30 games last season.

This production was vital for a Sun Devil team that lost three of its top-four scorers from last season. Thanks in part to Tapley, ASU is putting up more points per game this season (66.7) than last season (65.4).

“She needed us and we needed her,” Turner Thorne said.

That understanding has created a happy marriage and plenty of success.

“I’m able to relax and go as hard as I can,” Tapley said. “My teammates trust me. I don’t second guess as much. I used to all the time. The game comes to me easier.”

Over the past three years, Tapley’s playing time and opportunities fluctuated. As a freshman, she worked well under head coach Cynthia Cooper-Dyke, the coach who recruited her. She was trusted enough to start 15 games and she scored 5.7 points per contest on 46 percent shooting. But USC finished 14-16 and Cooper-Dyke left the program.

When USC hired Mark Trakh as coach, Tapley’s playing time dropped. She did not start a single game and only averaged two points per game. Over a third of her shots came from outside the arc, but she only made 26 percent of them.

She played more in year three and scored more efficiently, but she was still a misfit. Trakh never learned the best way to use her effectively with another big, so the perimeter is where she had to create a lot of her opportunities.

There were plenty of adjustments at ASU, given the Sun Devils needs and her past usage, but Tapley’s willingness to learn and Turner Thorne’s ability to teach were instrumental in smoothing the transition.

“She embraced the culture and loves what we’re about and who we are,” Turner Thorne said. “She’s been very coachable and does what she’s asked.”

“I learned things quickly so that worked out,” Tapley added. “I acknowledge when I’m wrong, so I just take in a lot of what she tells me and put it in my game.”

The opportunities that Tapley is getting may prepare her to achieve her career goals.

A role player on a 17-13 USC team does not jump off of the screen. An energizer bunny-type big who leads an NCAA Tournament team in scoring grabs more attention.

On Draft Site’s latest WNBA mock draft, no Sun Devil was projected to get her name called, but there were more players in the WNBA who went undrafted (13) than those who were third-round picks (six) in 2019, according to Medium.

To reach that level, Tapley still has a lot of improvements to make, and she knows that.

“Rebounding is a big one,” Tapley said. “Taking my time and not rushing so much. I’m so used to being quicker than people but I need to take my time and keep my poise; being strong with the ball and thinking before I do something first.”

Tapley’s ability to learn quickly and buy into what an established coach is trying to get out of her team shows a lot of maturity. Her coachability and pursuit to be the best version of herself could be attractive qualities for professional teams, whether it’s the WNBA or leagues overseas.

“I’m really proud of her and her growth from day one,” Turner Thorne said. “And she can still get better.”